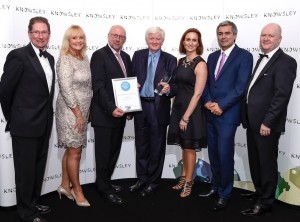 The £34m Chrysalis Fund invested £2.4m into the 110,000 sq ft high quality, grade A warehouse space along with £1m from the European Regional Development Fund and a £1.5m Growing Places Fund loan. The scheme was the first large scale speculative warehouse development in the City Region for over six years.

Meanwhile, international cable manufacturer Tratos was recognised for Commercial Development of the Year. Chrysalis invested £3.5m to help the manufacturer acquire an additional adjacent site for a 100,000 sq ft, bringing with it 100 jobs.

The funding from Chrysalis was instrumental in helping to bring forward both schemes which will provide a significant economic boost to the Liverpool City Region.

John Tatham, partnerships director at Igloo and fund manager at the Chrysalis Fund, said: “It is fantastic to see two of our flagship investments receive recognition for their contribution towards Knowsley’s economic prosperity. The Chrysalis Fund exists to help schemes like these get off the ground and it is great to see both Hornhouse Lane and Tratos thriving to provide a new commercial offering within Knowsley.”

The Knowsley Business and Regeneration awards recognise the creativity, enterprise and hard work of the individuals and organisations that continue to contribute towards Knowsley’s economic prosperity.

For the last nine consecutive years, Knowsley’s business base has continued to grow and the number of jobs in the borough has increased by 10 per cent since 2009 – the largest rate of growth in the Liverpool City Region. In addition to this, business start-up rates have almost doubled in the last 10 years.

Edward Perry, chair of the Knowsley Place Board and director of operations for Knowsley Hall led the judging panel this year along with other Knowsley Place Board members. Edward said: “The volume and quality of the nominations this year was fantastic. It is testament to the vibrancy of our business community here in Knowsley that we have so many successes to highlight. The awards provide a wonderful opportunity to celebrate the people and organisations behind these success stories.”

Cllr Mike Murphy, Knowsley’s Cabinet Member for Regeneration and Economic Development said: “Once again, the awards have been a fantastic celebration of Knowsley and its business and regeneration community.  It is such a great occasion to recognise the dedication of those people who continue to make Knowsley such a great place to do business.”