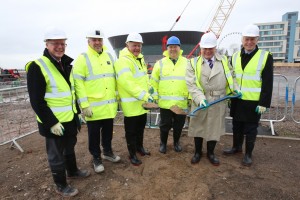 As work commenced on site at the £66 million exhibition centre and hotel in Liverpool today, the Chrysalis Fund announced that it has provided a loan of £8 million towards the exhibition centre element of the project.

This is the third deal for the Chrysalis Fund, which has now agreed loans in excess of £16 million for commercial and industrial property projects throughout the Liverpool City Region.

The Exhibition Centre Liverpool will be capable of hosting large conferences, trade and consumer exhibitions and sports and cultural events on a national and international scale. The new complex, which will also include a four-star hotel, will form part of ACC Liverpool, home to BT Convention Centre and Echo Arena.

It will feature an 8,100 sq m, three-hall exhibition centre which will connect to ACC Liverpool by a pedestrian link bridge, making the venue one of the only purpose-built interconnected arena, convention and exhibition centres in Europe. The exhibition centre is expected to open for business in summer 2015.

Jim Gill, chairman of the Chrysalis Fund said: “This deal is an important milestone for the fund and represents our commitment to invest in high quality urban regeneration schemes in the Liverpool City Region. It is fantastic that the loan will be used towards such an important scheme for the city which will bring about job creation and economic benefits – the two main drivers behind the Chrysalis Fund itself.”

Mayor of Liverpool Joe Anderson said: “Delivering a world class exhibition centre is a major priority for me. I’ve pushed this project hard from the beginning, because I know what a huge economic boost it will bring to our city and the jobs it will create. It’s a great example of how we are investing to earn. Exhibition Centre Liverpool and the integrated hotel will help us become one of Europe’s leading destinations for large conferences, exhibitions and events. It’s great news for our city that despite the difficult economic climate, we continue to drive forward with delivering important regeneration schemes like this.”

ACC Liverpool has proved a success since opening six years ago, generating £760 million in economic impact for the City Region.

In its first year of operation, Exhibition Centre Liverpool is expected to host about 50 events and attract more than 250,000 visitors.

It is estimated that the exhibition and event programme will support 1,300 jobs in the wider economy and contribute in the region of £40 million per year in economic benefit to the Merseyside area.

The Chrysalis Fund initiative is backed by the European Investment Bank, the Homes and Communities Agency (HCA) and European Regional Development Fund under the JESSICA (Joint European Support for Sustainable Investment in City Areas) programme. It launched in 2012 to re-ignite employment – creating commercial and industrial property development projects in Merseyside.